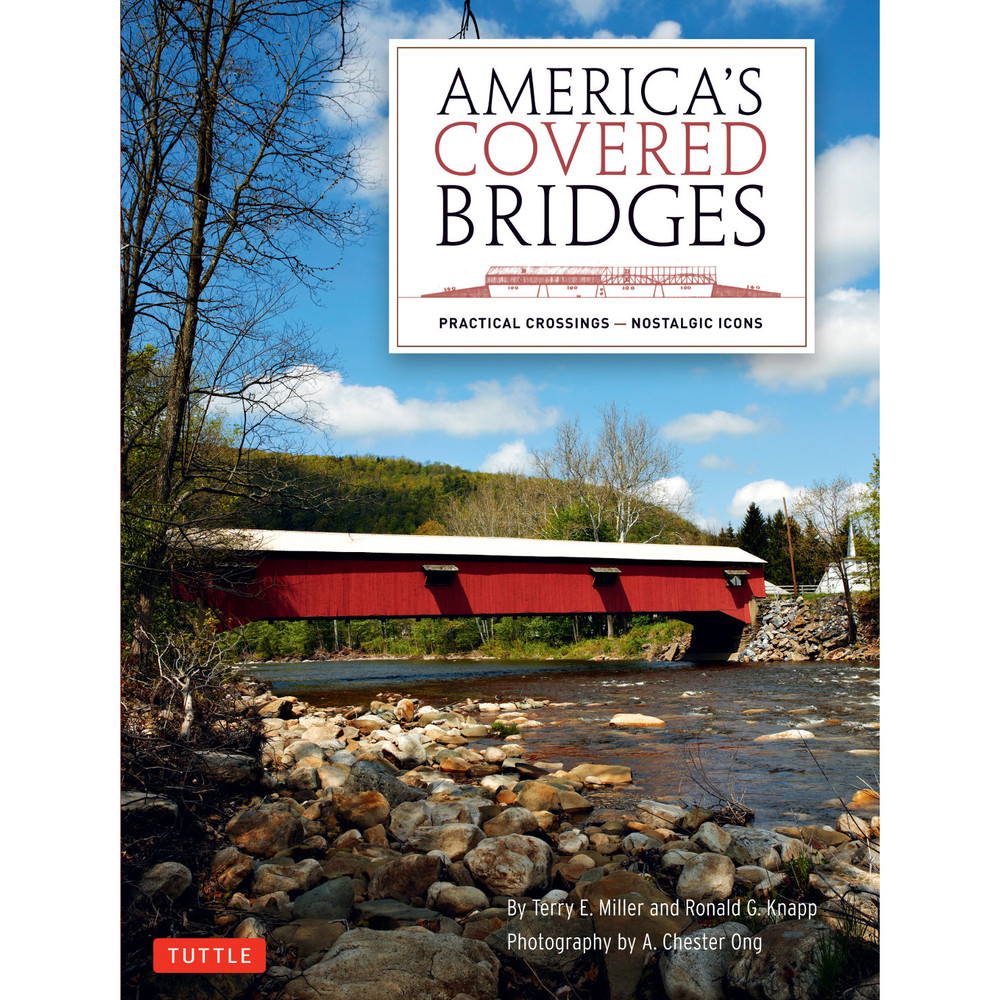 In America's Covered Bridges, authors Terry E. Miller and Ronald G. Knapp tell the fascinating story of these bridges, how they were built, the technological breakthroughs required to construct them and above all the dedication and skill of their builders. Each wooden bridge, whether still standing or long gone, has a story to tell about the nature of America at the time—not only about its transportation needs but the availability of materials and the technological prowess of the people who built it.

North American covered bridges were marvels of engineering long before modern civil engineering was invented. Early American bridge builders developed revolutionary new carpentry methods to join timbers into patterns consisting of triangles or continuous arches that resulted in structures rigid enough to span long distances. These systems, called trusses, were critical to bridge construction of the day and had to be protected from the elements by a roof and siding. Few people today realize that bridges were covered to protect the trusses—not the people using the bridge! The unprotected trusses soon degraded and the bridge would collapse.

55 photo essays on the most iconic bridges remaining, including:
Among the featured bridges are two that were destroyed before the book could be published, New York's Blenheim Bridge during a storm and Ohio's Humpback Bridge by arson. The Permanent Bridge in Philadelphia, considered by most as the first covered bridge in America, figures prominently, as do the bridges of Lancaster County—heart of Pennsylvania Dutch country. This compendium of classic Americana includes many of the most astounding and iconic bridges ever built in the United States, including those by Timothy Palmer, Theodore Burr and Lewis Wernwag. Some, like the Columbia-Wrightsville Bridge over the Susquehanna River in Pennsylvania, were a mile long.

Over time, wooden bridges eventually gave way to ones made of iron, steel and concrete. An American icon, many covered bridges became obsolete and were replaced—others simply decayed and collapsed. Many more were swept away by natural disasters and fires. America's Covered Bridges is absolutely packed with fascinating stories and information passionately told by two leading experts on this subject. The book will be of tremendous interest to anyone interested in American history, carpentry and technological change.


About the Author:
Terry E. Miller began visiting covered bridges with his father, Max T. Miller, in 1953 and has since visited more than 1,000 in the United States, Canada, Europe, and China, and researched the bridges of two Ohio counties from dusty handwritten journals. Miller spent his career teaching ethnomusicology at Kent State University in Kent, Ohio, retiring in 2005. In addition to his research and writings on the music of mainland Southeast Asia, he is the co-author of the popular textbook World Music: A Global Journey.

Ronald G. Knapp is a historical-cultural geographer at State University of New York at New Paltz, where he taught from 1968 to 2001. For the past forty-five years, his research has focused on China's frontier history and Chinese vernacular architecture with many books that celebrate these traditions. His book, Chinese Bridges: Living Architecture from China's Past introduced China's covered bridges to Western readers and has served as the model for America's Covered Bridges: Practical Crossings—Nostalgic Icons.