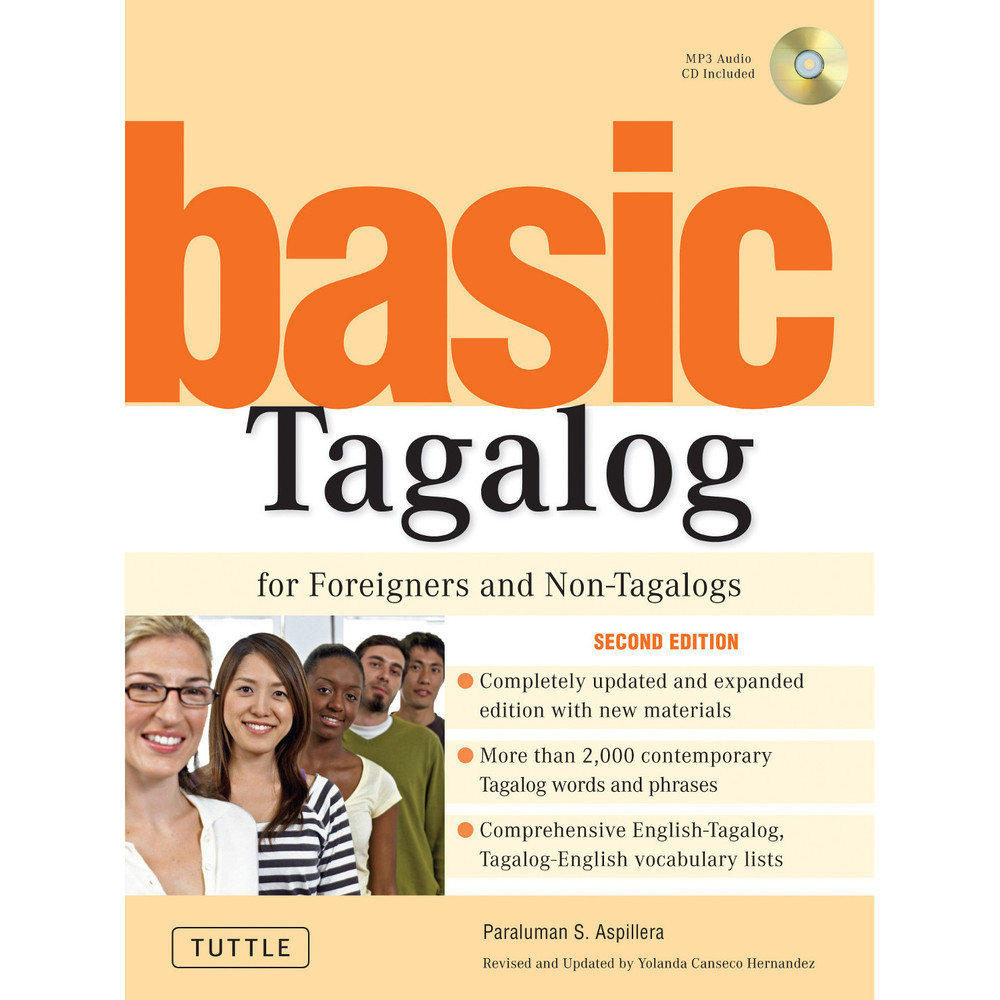 Basic Tagalog for Foreigners and Non-Tagalogs

Downloadable ContentBasic Tagalog takes a friendly and innovative approach, emphasizing the structure of the Tagalog language rather than just vocabulary.

This user–friendly beginner Tagalog book teaches more than 2,000 Tagalog words and expressions with over 500 being added for this new edition. These are spread throughout 44 lessons, the Appendices and the exercises as well as in the Tagalog–English and English–Tagalog vocabulary lists at the back of the book. The added Tagalog vocabulary is meant to keep learners abreast of changes that have occurred in the language since the first edition of Basic Tagalog which was published. This edition has retained all the grammar lessons, and the tried–and–tested teaching methodology developed b the author, Paraluman S. Aspillera, for the original version. Her method has proven to be extremely efficient for tens of thousands of foreigners and non–Tagalogs who have used this book to learn to learn Tagalog, including many who have successfully learned to speak Tagalog, read Tagalog and write Tagalog through self–study on their own without a teacher. An audio CD has also been added to facilitate the correct pronunciation of Tagalog words and phrases. A succinct introduction to the language and a description of the character of Filipinos will hopefully provide learners with a better understanding of the language they are learning.

The lessons in Basic Tagalog are intended for a three–month period of intensive study followed by another three months of applied oral communication. In six months (or about 250 hours), it is expected that an average learner should be able to speak, write and understand simple, everyday, conversational Tagalog as spoken by most Filipinos. Highlights of this book include:Using Basic Tagalog to study the Tagalog language will further encourage both non–Tagalogs and non–Filipinos to speak Tagalog better. Only then will they appreciate the individuality of the language that reflects the resilience and flexibility of Filipinos all around the world. In the end, such learning will improve daily interactions and communications between non–Filipinos and Filipinos—whether in business, education, tourism, social or civic endeavors.


About the Author:
Paraluman Aspillera, author, teacher, and newspaper journalist, specialized in the teaching of English and Tagalog. She was director of the Institute of Filipino Language and Culture at Philippine Women's University and a professor of Pilipino and Philippine Literature at the Institute of Asian Studies, University of the Philippines. She wrote the popular daily column "Your Tagalog Column," which appeared in the Manila Times, and authored many books and articles in both English and Tagalog. Mrs. Aspillera dedicated herself to promoting the national language and culture of her country through extensive travel in North America, Europe, and Asia, and served as executive secretary and director of the UNESCO-sponsored Akademya ng Wikang Pilipino.

Yolanda Canseco Hernandes holds a Master of Arts in English and a B.A. in Literature in Journalism. She was a mentor for more than 10 years at the Philippine Women's University and also taught at the Institute of Filipino Language and Culture.