Nicholas Coffill is the author of our recently released title, Photography in Cambodia: 1866 to the Present. We caught up with him to talk about this beautiful and powerful new book, and how he came to be a curator of Cambodian history. You can purchase the book here.

Congrats on the release of your new book, Nick! Tell us a bit of your story and what brought you to this project.

Thanks for the congratulations! It’s been a long but enjoyable journey.

I trained in theater design, then moved quickly into museum design and exhibition work. I worked throughout Asia and around the world for 30 years. 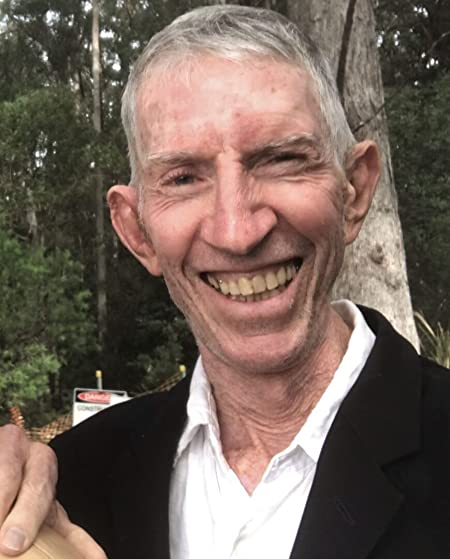 In 2016 I found myself in a stinking hot shophouse in Siem Reap with my business partner Jon de Rule – we both started in theater as teenagers. Working with a local carpenter, a lighting technician, and a musician we were trying to build a TED-like ‘live-media’ show about the contemporary history of Cambodia using photographs, music, and heritage film clips.

It took six months of hard research and concept building until that fateful night when we launched the show to close friends. A huge clap of thunder and a bolt of lightning fused the entire street into a blackout. Then the torrential monsoon rains bucketed down. What a great theatrical beginning!

Over two years Jon and I performed about 80 shows. It was wonderful to be back into theater and using those early skills to entertain people about Cambodia’s rich and complex history.

Good theater is, of course, an emotionally powerful experience; however it leaves no physical legacy. So, two years later in 2018, I decided to sit down and compile a book that required different revelations and a broader scope that, by its nature, theater couldn’t provide.

That took two years of intense online research and fieldwork throughout Cambodia.

There was only one publishing group I was prepared to go to, and that was TUTTLE. The company had the design publishing experience and a global distribution reach. Moreover, its catalog was known for its Asian focus. And dare I say, my best Singaporean mate has worked there and knew the CEO, Eric Oey – connections matter!

The production process from rough design to finish product took another two years. Welcome to 2022!

The book traces the history — or histories — of Cambodia with literary deftness and visual impact. What do you hope readers learn about Cambodia from this book?

I hope readers – no! I’m going to change that! I know readers, and this includes Cambodians, will get to see a more complex and nuanced history of the country through the images taken by multiple photographers that lived and died here, or earlier photographers who traveled through the country and saw it as an exotic colonial experience.

I understand the nature of art galleries and the placement of photography within the cultural mainstreams, so my approach was more of a ‘taunting social history’ approach. In that spirit, I included amateur as well as professional photography, along with popular, medical, journalistic, military, and performance photography. There's even some photo memorabilia like picture postcards and chocolate and cigarette cards.

So this Cambodian photographic history is more eclectic than most other country-specific histories that have been published in the last decade. From that perspective I believe it’s a breath of fresh air.

Perhaps the most well known aspect of Cambodian history is the tragic rise of the Khmer Rouge regime. But this is only part of the story. Can you tell us about how you see the Khmer Rouge period in light of the larger story your book covers?

For a start, people neatly bracket the Khmer Rouge from 1975 to 1979. I have photographs however, of people who were under the Khmer Rouge in the early 1970's — and much later, well up to the late 1990's on the border regions with Thailand. Looking closely, you see a more nuanced wearing of costume and clothing which hints at the waxing and waning influence of radical communism from its earlier period of total control. In the early 1980's Craig Buck took some great images of Khmer Rouge cadres admiring their pet parrot or a marmot and toying around with a video camera (see page 192). 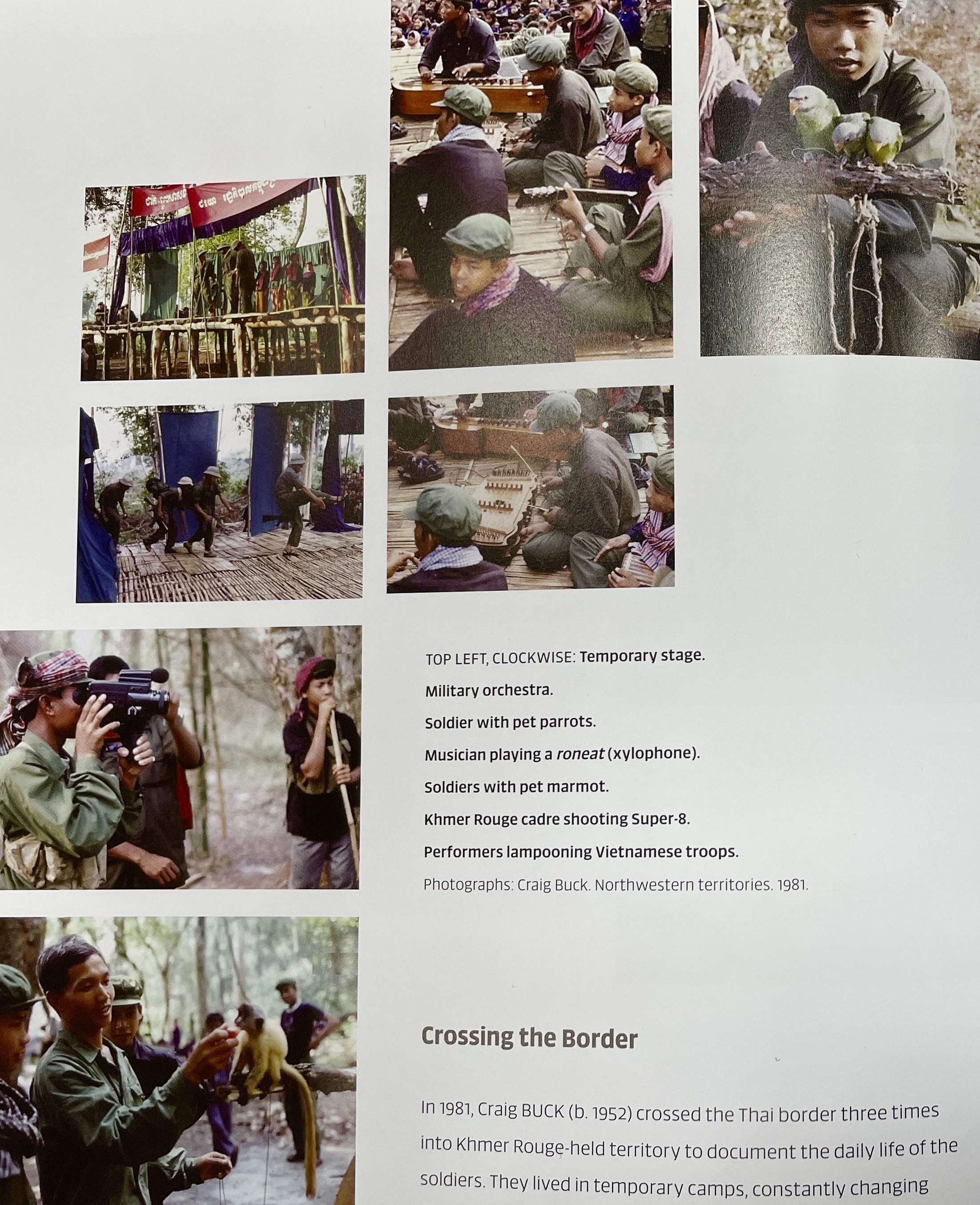 While the historian's written word tends to repeat, paraphrase, or refine previous research, a photograph can knock some of those repetitions off the page. I attempted to do that regularly through the book, so that the photographs I decided to print told a more colorful or complex story than the mainstream text-based books — just as Buck’s photo (above) shows Khmer Rouge soldiers at play.

As someone who lives and works in the country, what are your impressions of Cambodia now, and what are your hopes for its future?

‘Same bus, different driver’ a close Cambodian friend of mine says philosophically and with a wry grin when discussing the political fortunes of the country.

Socioeconomically, in the past decades of relative peace, the country is becoming a success with the three big cities of Phnom Penh, Battambang, and Siem Reap drawing in thousands of the rural poor who take advantage of the opportunities of the globally connected cosmopolitan churn. This improves their living standards, though many stumble and fall short of success, of course. However, some create eye watering riches that are as gauche as a Jeff Koons puppy — without the irony.

But this urban diversity has provided an opportunity for galleries and museums and art spaces to flourish. And through mentorship, companionship, and professional support, a new wave of serious and thoughtful photographers has emerged.

Do you have any favorite photographs from the book?

You bet! I have two favorite photos. No! Make that thirty-six! But one is at the height of nineteenth century colonial French power when the colonial bureaucrat Adémard Leclerc traveled around the country in 1888. He took a photograph of twenty-six Khas warriors. These fellows are lying down or on their haunches with the spears pointing to the skies, despite what must have been a strange, if not bewildering phenomenon of a Frenchman hiding behind a box on a spindly tripod. They are completely relaxed and at ease with the experience. It suggests their enormous sense of self-confidence and perhaps an unwillingness or a disinterest in engaging with the French colonial enterprise (see page 35, top image).

If we move forward almost 100 years and look at Sharon May‘s photograph of a girl running through the makeshift streets of a refugee camp, we find the image loaded with a thousand questions. Where is she running to? Who is she running from? Is she running in play? I found this photograph intriguing, fun, and an engaging portrait of the human spirit under adversity (see pages 196-7).

What do you hope readers take away from their time spent with the photos and stories in Photography in Cambodia?

The key takeaway for readers is to realize that Cambodia, like all other cultures, is full of humor, verbosity, idiocy, splendor, tragedy, humility, and creativity. 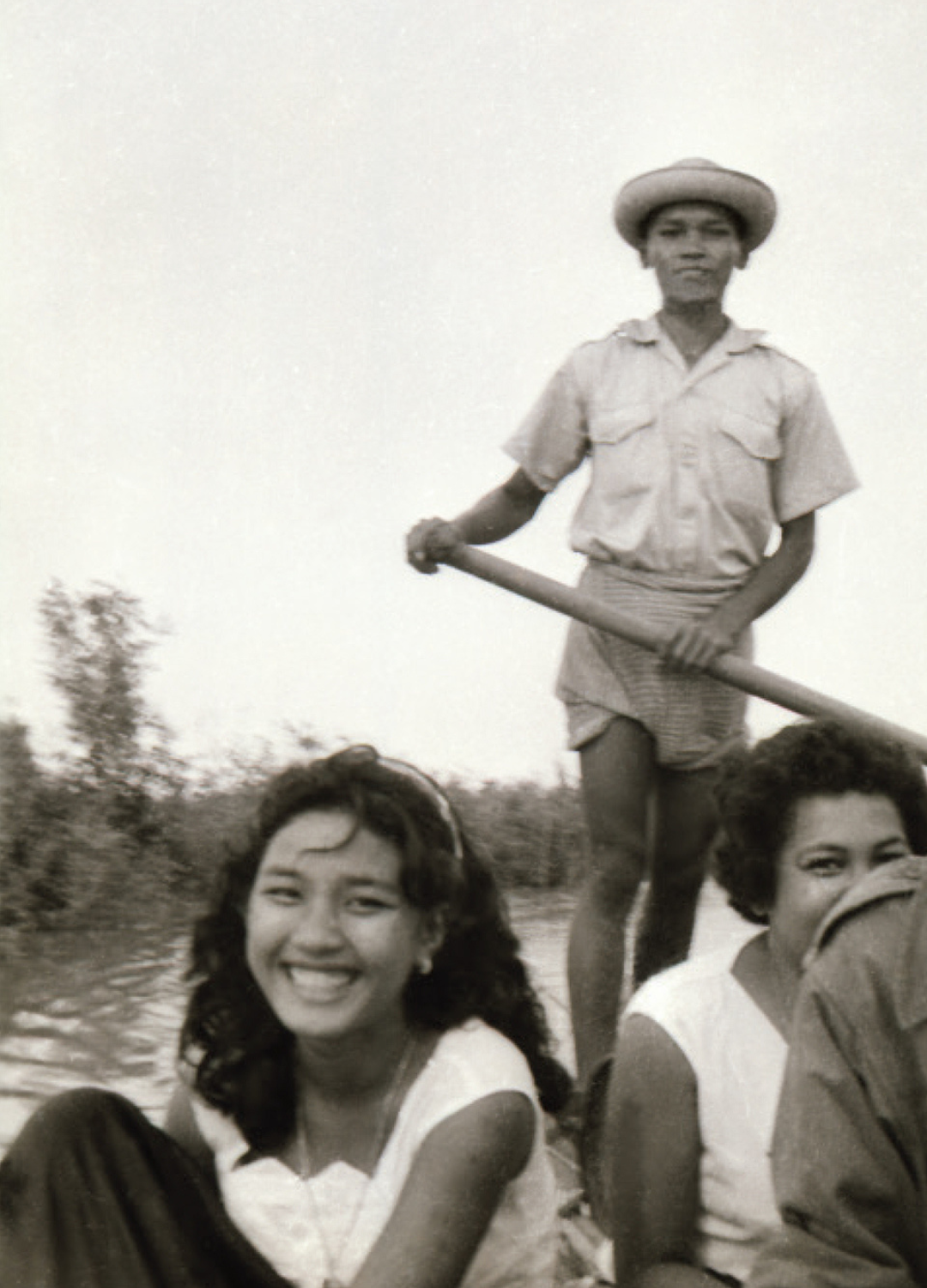 Can you tease any upcoming projects?

For the future? Well, I have created the theatrical show, now it has been turned into a book, and last month I worked furiously to create a photographic exhibition based on the books research. The exhibition is at the FCC Angkor Gallery in Siem Reap, and has over 250 images – both original and reproductions – that make it the largest photographic display in the country. My intent is that it is both a marketing as well as an educational tool.

Already many young students from the foundation years of university have spent hours going through the exhibition, and I can tell by overhearing their conversation and watching their body language that it has really changed their perceptions about their country‘s history.

I’m planning for the exhibition to tour across the country later in the year. I am a happy man! But I must cycle off, there is a housewarming party in a new Cambodian wooden house in my village down the riverside. I want to enjoy the Buddhist ceremony that precedes the party tonight. And it’s about to rain!

Thanks for your time today, Nick, and enjoy the party! Are there any other photographic history books that you could recommend to our audience for further reading and learning?

Sure. The recently released 1,500 years of Cambodian Wooden Houses, by Hok Sokol and Darryl Collins, is stuffed with historical and contemporary photos and drawings on the subject. If you search the second-hand bookshops for titles from the late 1960’s, there's Sinou: Une Petite Cambodgienne. It’s part of a global series on children of the world, and has some great use of cut-out imagery, poetry, and prose, that fittingly won it the French Bologna Prize for book design in 1971. Finally, small booklets, zines, and catalogues published by contemporary photographers and collectors of photography are worth tracking down through the local arts and gallery scene. They will become important documents of cultural change as Cambodia grapples with twenty-first century issues. We can all relate to that! 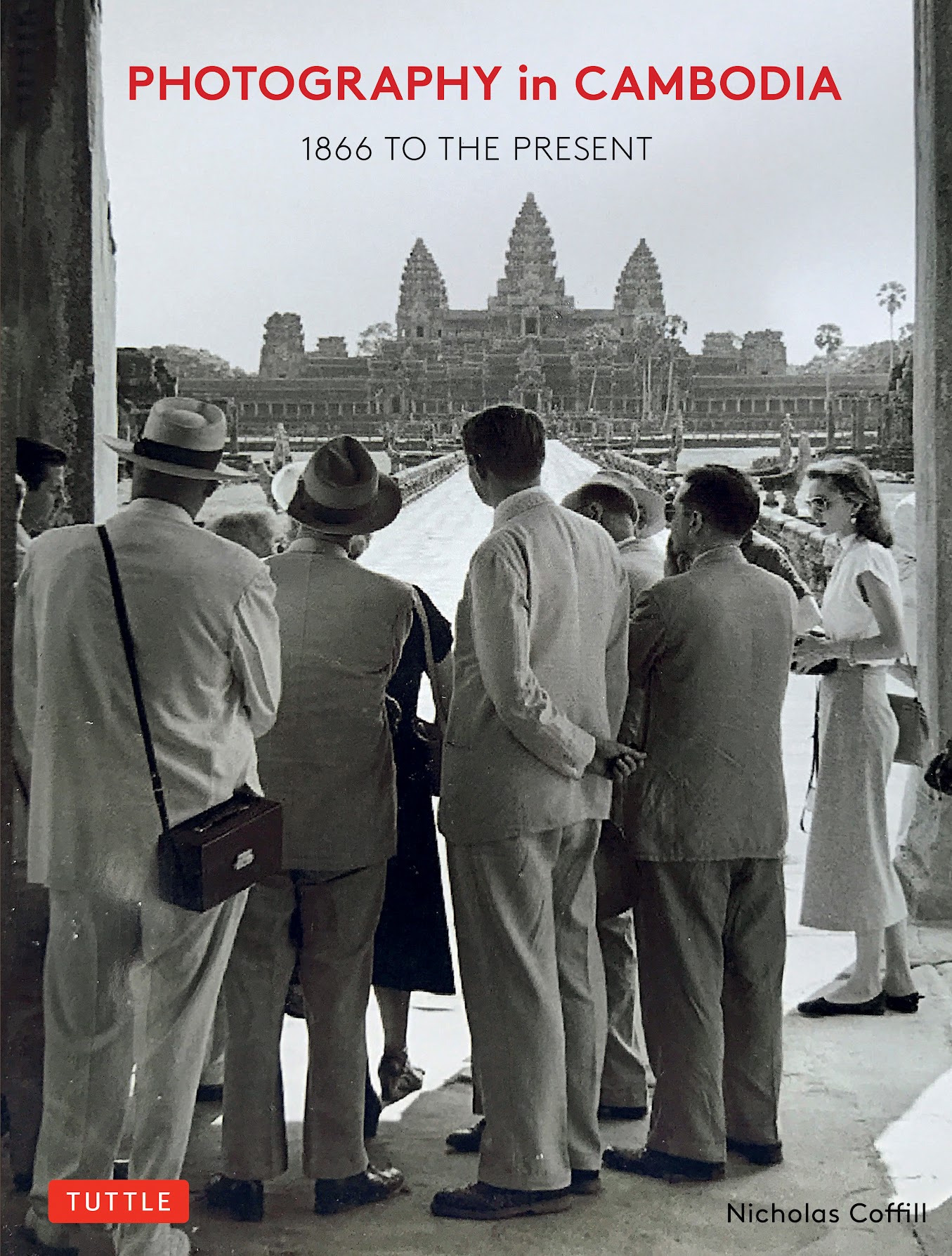 Photography in Cambodia is a stunning visual journey through Cambodian culture, history, art, struggle, and modernization. Within these pages, readers will find a fresh perspective on Cambodia. From the early days of French colonialism through the struggle for independence, and emergence into an uneasy peace in the 21st century.

You can purchase the book here.