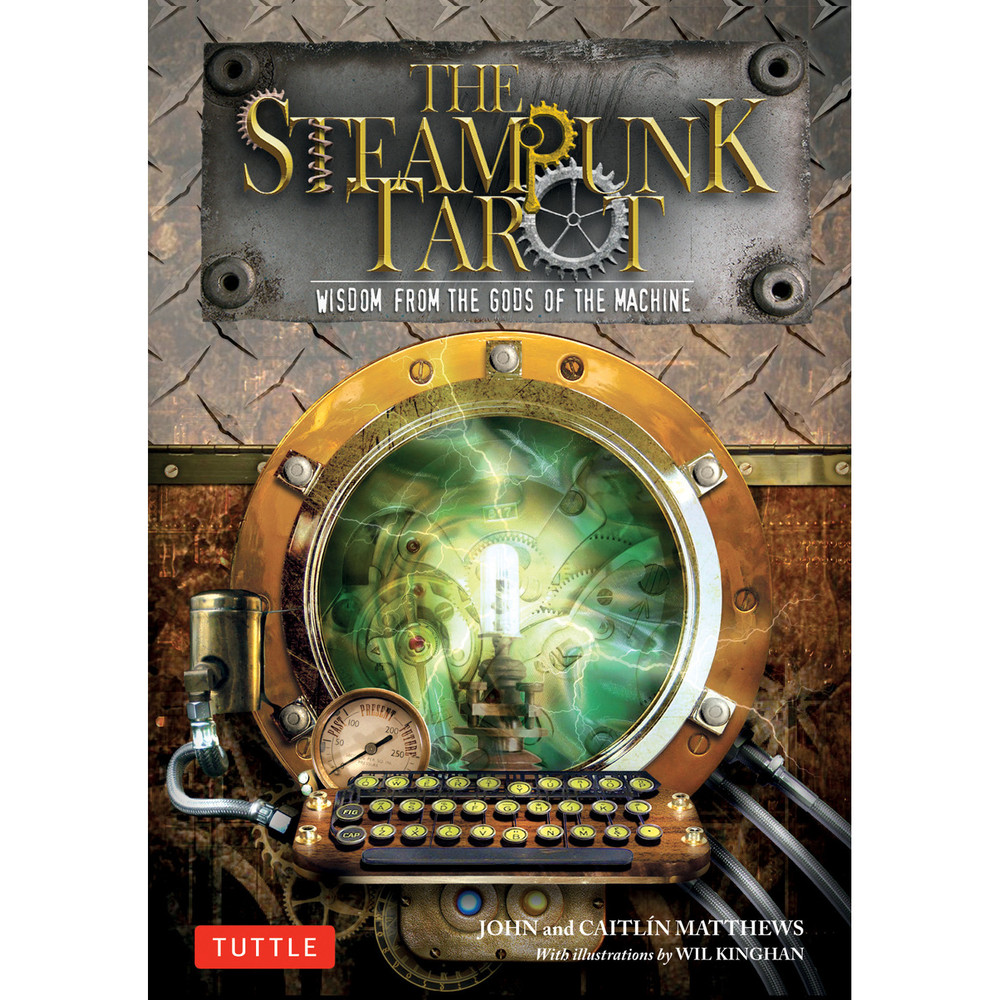 Tumble down the rabbit hole into a construction of technology, machines, retro-art and culture, full of fantastic visions in a time and place that realizes an alternate world to our own. The Steampunk Tarot imagines this in an alternate-reality tarot where The Technomage is king and the Punk Diva is queen.

The world of steampunk combines Victorian and Gothic elements, and early invention with a huge dash of imagination and a tremendous sense of style. The Steampunk Tarot is a world apart: a nexus of opulence, innovation and alternate world-views that is reflected in 78 scenes. The 22 major arcana cards are the actors at the heart of the machine, the deos macninae or "the gods of the machine."

Acting as mediators of the Gods of the Machine are the 16 court cards who are the Legates of the Omniverse, or ambassadorial representatives of the Four Leagues, comprising all the skills that maintain the Imperium: they are the movers and shakers--the Commander, Lady, Navigator, and Messenger, or King, Queen, Knight and Page. They oversee the other 40 cards of the minor arcana, who are the elemental worlds of Airships, Engines, Submersibles and Gears, or Swords, Wands, Cups and Coins.

There are still things to discover and uncover in the Steampunk Imperium. Many new methods of spreading and playing with tarot cards are included, as well as methods of life-navigation by the use of skillful questions. The Steampunk Tarot is an adventurous tarot for the discerning diviner, to be appreciated both by tarot-users and steampunk fans.


About the Author:
John Matthews has produced a number of successful divinatory systems based on early spiritual beliefs - including the best selling Arthurian Tarot (with Caitlin Matthews and Miranda Gray), The Wildwood Tarot (with Mark Ryan and Will Worthington), The Green Man Tree Oracle (with Will Worthington), The Celtic Animal Oracle and the recent, highly successful Grail Tarot (with Giovanni Casselli). He is widely know as the author of numerous books in The Grail and Arthurian legends genre, the classic study of Western Esoteric beliefs, The Western Way (with Caitlin Matthews), and several volumes of Celtic literature, myth and belief. His book Pirates was No 1 in the New York Times Reviews of Books and a best seller for 22 weeks in 2007. He has acted as an advisor on several motion pictures, including Jerry Bruckheimer's King Arthur, and is currently engaged on several movie projects of his own.

Caitlin Matthews is the author of many successful tarots and oracles including The Arthurian Tarot, The Da Vinci Enigma Tarot, The Celtic Wisdom Tarot, The Celtic Book of the Dead and The Celtic Wisdom Oracle. Caitlin is a practical adherent of steampunk, still performing many daily tasks by hand and with innovative craft. With John Matthews she is the creator of the Storyworld Cards series, enabling families to return to the art of storytelling around the hearth. She is acknowledged worldwide as a leading teacher in the Western esoteric traditions. She lives in Oxford where she bridges many worlds in her shamanic practice. Visit www.hallowquest.org.uk

Wil Kinghan is a writer, artist and explorer of the Hermetic and Celtic traditions. He studied Archeology at University College Dublin, and Environmental Design at NCAD in the 1980s. He then worked in advertising and commercial art as an Art Director (Kenny's Adv; Ark's Adv), winning awards for various campaigns such as for Guinness in the 1990s. He left advertising to form his own company and develop his art and writing. He recently completed work on several writing and illustration projects including The Shaman's Oracle (Watkins, 2010) and The Ancestor Oracle (Watkins, 2011). He is also working on his first novel and has published a selection of poetry Where the Hazel Falls.